In this article we will discuss how to model risk in project planning. Two primary sources of risk are time and cost; we'll focus on time because it is slightly more complicated; a similar analysis can be applied to cost planning (See note 1).

With practice, and good analytical techniques, you can generally construct a reasonable projection for project completion time. But in the real world, it's not possible to anticipate every contingency, and even the best project planning will include some over- or underestimates.

To take this reality into account, it's common in project planning to produce multiple estimates for project completion time. Estimating best-case, worst-case, and expected estimates gives you a range of completion times, and tries to take into account the risk of unanticipated factors.

Let's further assume that these tasks must be completed in sequence, meaning each task is dependent on the task before it. How long will the project take to complete?

You can look at the projections for each task and add them; this will give you the best-case, expected, and worst-case scenario for the entire project.

This is useful, but still unrealistic; because it's unlikely that each task will take the best-case time, or the worst-case time. More likely, one task will take a little longer, and another will be completed ahead of schedule.

This is where Monte Carlo analysis can be helpful. Starting with the estimates for the project, we can run an analysis based on random estimates for each task. This will produce a model that takes into account variability, and also considers that each task is independent.

In this case, with random values selected for each task, you can see that the first task takes a little longer than expected. The last task takes longer as well. The second task is completed ahead of schedule.

Overall, this is the sort of thing we would expect to see in the real world; not the best case, not the worst case, but somewhere in between. A single random case is not useful, however, because it represents only one out of essentially limitless possibilities. This is where we can use Monte Carlo simulation to measure understand the risk.

In a Monte Carlo analysis, we run the same model — selecting a random value for each task — but we do it hundreds or thousands of times. Each time it runs, we record the values. When the simulation is complete, we can look at statistics from the simulation' to understand the risk in the model.

We'll start with the basic statistics: the minimum, maximum, and average.

Three notes about this table before we continue:

The first thing we can take away from this data is that the average completion time is close to our central estimate. That is what we would expect; it's the most likely case for each task. Next, we can see that the best and worst cases from the simulation — the minimum and maximum of the total — are not as extreme as the absolute best and worst cases, if we just summed up the estimates.

That is to be expected as well, because the tasks are independent. Even if one task takes the worst-case time, it's not necessarily likely that another task will meet the worst-case estimate. The Monte Carlo model helps capture this independent variability, and allows us to tighten up the estimates a bit. We can now say that the worst case scenario is 70 days, instead of 80.

Next, we can look at the range of data generated during the Monte Carlo simulation to understand more about the projections. 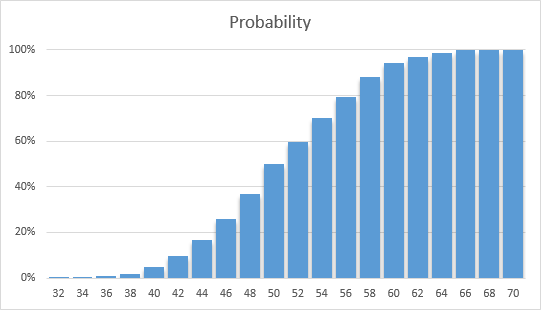 What does that mean? When we ran the Monte Carlo simulation, we used random values for each task (based on the estimates), and found the total time for the project. We did that 1,000 times, and each time different random values were selected, resulting in a new random total.

Similarly, during the simulation there was a 94% chance that the project was completed within 60 days.

We can also reverse the question, and ask what the completion time was — based on probability from the simulation — at various probability levels. If we want to be 80% sure that the project will be complete, for example, we need to budget 57 days for the project; because in 80% of the cases the project took at least 57 days to complete.

The above chart looks at completion on or before a particular date; in order to prevent under-utilization of resources, we might also consider the actual completion date. We won't address that in this discussion, but the chart looks like this: 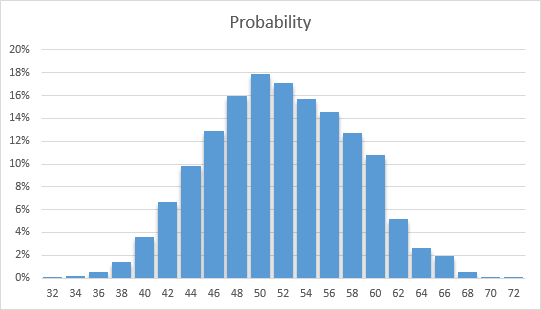 Based on this analysis, we can find a couple of key points from the model and the analysis:

The analysis above, and the data taken from the simulation, is entirely based on the project estimates we created in the first step. The validity and the usefulness of the analysis, therefore, is only as good as our ability to estimate.

If the estimates are too broad, or too narrow, or even if the "Most Likely" point is at the wrong place between the values, the analysis may misstate the overall risk.

It's also important not to create estimates that are too broad, and assume you can use the analysis to narrow the probabilities.

The estimates are the most important part of the model. That much, in project planning, is a combination of art and skill. Monte Carlo analysis is just a tool that compliments this. If you can generate viable project estimates, however, Monte Carlo analysis can be invaluable in helping identify and understand risks in your project planning models.

You can try building a project risk model on the web with our new set of web-based risk tools. This is a beta application, so it's not quite finished yet, but you are welcome to try it out.

Click here to try out the Risk Project Model. 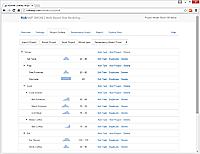 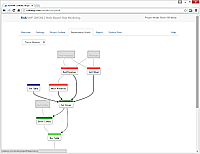 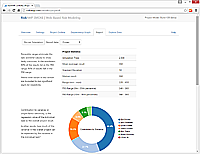 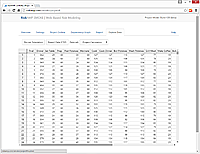 The example files use the RiskAMP Monte Carlo add-in; if you don’t have the add-in already, you can download a free trial version from our download page. 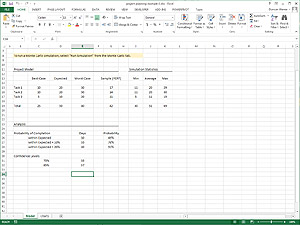 This file contains the model described in the above note. You can re-run the Monte Carlo simulation, as well as modify various values to see how they impact the analysis. 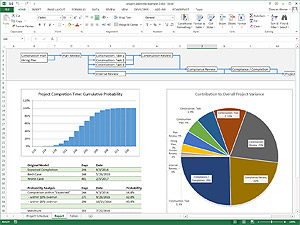 The first example is relatively simple, for the purposes of describing how the underlying analysis works. This second example contains a more complex model, but it uses an identical analysis.